Home » About Us » About Casey A. Waters

About Casey A. Waters

I buy and sell fine daguerreotypes, cased images and photographs. Daguerreotype and cased image restoration for clients, along with leather case repairs are part of my professional services. I am also a modern daguerreotypist. 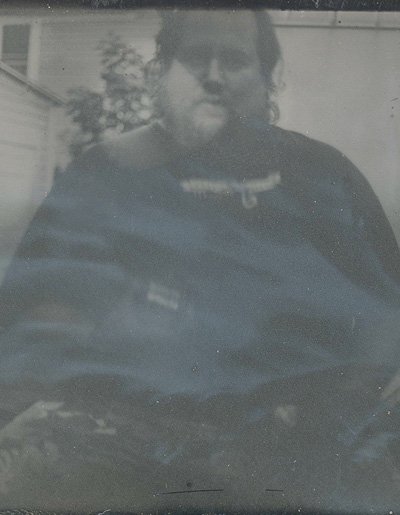 I’ve been in the business of hunting for daguerreotypes since i was five years old when my dad started collecting. i have many memories of being woken up early, napping in the car and waking up in some distant locale to go out on the hunt. from a young age, erin and i were known to upstage many an antique dealer by informing them that their images were not in fact daguerreotypes. we both literally grew up in daguerreian world. as a kid i never thought i’d be working with my dad in the business of all things dags and old photos. a few times i remember thinking that it would be great to take pictures with dad, as most of our childhood he was also a prolific industrial photographer. after attending george washington university, having a rather good time and learning how to play rugby, i had to part ways with the school, let’s say. in 2003 when i got home, dad had just acquired a large dag collection and needed help with resealing. i’d done my fair share of reseals over the years, but didn’t really know the finer points. learning from him as he had learned from george whiteley i embarked on resealing this large collection. when we started to realize that i was rather good at it, he suggested instead of finding a “job” that i make a go of it at resealing. so i did, and it’s worked for the last 13 years. along the way i’ve figured things out in my own way and developed my own techniques that have been appreciated by many happy customers. i do a lot of work for ancestors, so it’s really nice to help enhance a family’s history through their old photos.

for the first few years being aware of daguerreotypes, i didn’t realize that they could still be made. when i was about 10 years old i saw robert schlaer making dags at an event in virginia. it blew my mind that this guy was making dags just like the ones i’d been hunting down all over new england with my family. the fascination was born there but didn’t return until about 2007 when there were only a few active daguerreians. i was lucky enough to learn from rob mcelroy in 2008. even luckier still, shortly after i learned the process i was able to buy a mostly fully functioning dag apparatus from a photographer in west virginia named robert schram. i think about a day or two after i returned from a road trip with a car full of dag materials i set up a makeshift polishing room in our greenhouse and the mercury pot in dad’s old darkroom. it was early spring and i wanted to find the last patch of snow in the woods to make my first dag. i don’t know where i got this idea but it stuck, so i trudged out into the fort rock woods close to home with a giant 4×5 camera case and big tripod with i think two polished plates. my first effort was a success showing some pine trees and a patch of snow in the woods. the other image wasn’t that great and so i repolished that one. fast forward to 2016 and i’ve resealed over 5,000 dags and made a few hundred. kim iocovozzi of savannah georgia was nice enough to host my first dag show to a much adoring crowd. i think i’ve sold all of the 34 images that i hung there. i’ve also had images in shows in exeter, nh, atlanta, ga, ashland, oh, brattleboro, vt, los angeles, ca and nyc. my dags are in many private collections and five are in the amc collection in toronto canada. i continue to be in the business of resealing as well as dealing in dags and other photos. I also repair leather cases. i’m always taking photos of some sort but am proud to say i don’t own a digital camera besides on my phone.